But one of their papas was, without a question, Helmut Käutner. His films of 1950’s, such as Ludwig II: Glanz und Ende eines Königs (1954), Des Teufels General (1955), or Der Hauptmann von Köpenick (1956), must have failed to resonate with younger kids who were trying to digest the questions of “zone boundaries”, “rearmament” or “Elvis”. To many, Käutner’s socio-political stance was that of avoidance: avoiding the questions of the Nazi past, as if making such ‘waves’ would have not serve anyone any good. Käutner had been avoiding the question since his days during Nazi era. His Romanze in Moll (1943) and Unter den Brücken (1945) never give a hint of the shadow of Gobbels: his films looked away from the harsh reality of everyday destruction. Some called him defeatist. His postwar films were interpreted as translation of ‘political conflicts into the heightened terms of (unfulfilled) romantic love’ (3). However, I think these interpretations truncate his delicate imagery vapidly.

The story of In jenen Tagen was narrated by a car, – an abandoned wreck among rabbles of postwar Berlin, now being ripped apart for scrap metals. This car saw lives of people during the dark years of the previous decade, from 1933 to 1945. In the manner of Tales of Manhattan (1942), we are guided through the seven different stories of the seven different owners of the car – a wife who realizes her husband has to flee the country, a girl in love with a ‘degenerate’ musician, an old couple who saw the darkest reality in ‘Kristallnacht’ … its camera captures vivid, honest, but astonishing images of everyday life.

The most visually striking of this omnibus is the second story, about a girl and a musician. The Buschenhagens, an affluent upper-middle-class family, befriends a composer of modern music, Wolfgang Grunelius, and its naïve teenage daughter, Angela, has a crush on him. When Wolfgang returns from the concert tour, Angela suspects her mother is having an affair with Wolfgang, upon discovering her mother’s comb in his car. During a family picnic with the composer, Angela tries to reveal the secret, but before she speaks up, Wolfgang reveals he was banned from composing music. She loses her words and shoves the comb into the back of the glove compartment of his car. This is probably set in late 1934 or 1935, since Wolfgang speaks of the incident of Hindemith, which occurred in November 1934. The picnic scene is particularly memorable: it is filled with natural sunlight, providing a pastoral, peaceful background. Angela’s father is particularly in a good mood, mumbling about a trip to Italy. Angela tries to break into the conversation with insinuating words, which are only to be deflected by her mother. This anchor-less flow of conversation is suddenly shattered and silenced by Wolfgang’s revelation. A series of intense zooming closeups explores the core of loss, loss of words, loss of reaction, and loss of dignity. 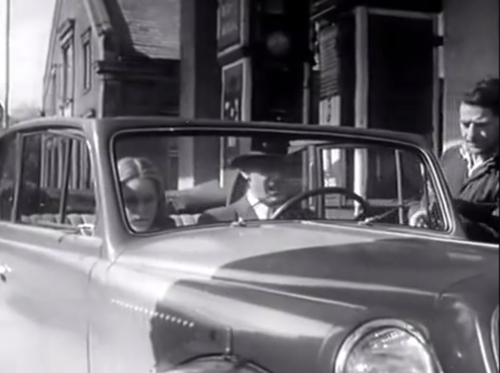 The film was produced under dismal conditions. The camera was on lease, the entire film was shot on location (all German studios had been destroyed), and the equipments and the rigs were so scarce that the crew had to rely on whatever was available to them. I mean, it sounds like Italian Neo-realism, French New Wave, German New Cinema, or indie films of ’90s, doesn’t it? And that is so refreshing about this film. The look and feel of the film is certainly that of the films decades later. There are beautiful reflections of trees on the car’s windshields (apparently Käutner and the cameraman Igor Oberberg aimed at the reflection, not the actress behind the wheel), the freely mobile camera doing a 180-degree ‘vertical’ scan of the tree line, Bach’s music being layered over Angela’s discovery, and a stark composition of the broken window, the desperate old couple and the dark street of Kristallnacht. The contemporary review appeared on Die Zeit (June 1947) praised the film, but it is rather curious that it cited technical deficiencies (probably referring to ‘new-wave-style’ filmmaking) and German’s inability (or inappropriateness) to debate about the condition of modern men (it had been only two years since the end of Nazi atrocities). If not for these inevitable cultural isolation plus widening political polarization inside Germany in the following years (and Cold War), this film might have been recognized differently. Some find this story self-serving and avoiding to answer critical ‘questions’ about responsibility – after all, there is no Gestapo-type sadist in this film – but I wonder if there had been any other way to start rebuilding the nation’s lost cultural ground. If anything, Käutner had never been good at such things and never was. Who is? I wonder.

Copyrighted materials, if any, on this web page are included as “fair use”. These are used for the purpose of research, review or critical analysis, and will be removed at the request of copyright owner(s).